The Problem: A Deeper Dive

What Powers Do Prosecutors Have and What Is Prosecutorial Misconduct?

Prosecutors have immense power in our legal system. While there has been public focus on police action, there is rarely public attention to prosecutors, who have been described as the most powerful officials in the criminal legal system—more powerful than police officers and often even more powerful than judges.1 For that reason, prosecutorial power cannot be separated from the mass incarceration and racial oppression that constitute the fabric of the modern American punishment system.

The Role of Prosecutors in Mass Incarceration

The United States has the highest incarceration rate in the world. Prosecutors decide who to prosecute, with what charges, what plea offers they give (if any), and whether to recommend incarceration (and if so, how much). Without prosecutors requesting incarceration (whether pretrial or post conviction), we would not have the mass incarceration epidemic we face today. Indeed, scholars have convincingly argued that the single most important factor in the rise of mass incarceration in the 1980’s and ‘90’s was a dramatic increase in prosecutors’ decision to file felony charges. Other causes of mass incarceration, such as more punitive sentencing laws, were sometimes supported or even proposed by prosecutor organizations. A 2020 study noted that even since 2003, prosecutors have filed more charges per arrest.2

Every year, police arrest millions of people.3 But an arrest does not mean someone is formally charged in court. It is up to the prosecutor to review a police report and decide to charge the person with a crime—or not—the “tipping point” of how someone’s life will be impacted by the criminal legal system.4 In death penalty cases, “[t]he prosecutor bears the sole responsibility for setting the death machine in motion.”5

As former prosecutor, now Professor Paul Butler, has noted, “American prosecutors have so much discretion, and there are so many criminal laws, that they can bring a case against virtually whomever they choose.” Proving this point, a 2020 study passed out the same hypothetical arrest scenario to 541 prosecutors across the country.6 The prosecutors’ responses were all over the map, charging the allegations in a variety of ways, such as felony charges and jail confinement, misdemeanor charges, and no charges at all. This haphazard result conclusively demonstrates what many already know: people accused of the same act suffer wildly different consequences.

As the study makes clear, the lives of arrested persons’ “are all in the hands of one criminal justice actor: a prosecutor. None of these arrests become cases unless a prosecutor makes a decision. Prosecutors decide whether to initiate criminal proceedings, what charges to bring, what penalties to seek, and when a plea bargain is appropriate. And since 94% of criminal cases are resolved by plea bargain, prosecutors, not judges, are determining a defendant’s fate the vast majority of the time.”7

The Role of Prosecutors in Structural Racism

The majority of incarcerated people are men of color, particularly Black men. Black Americans are incarcerated in state prisons at nearly five times the rate of whites, while Latinx people are 1.3 times more likely to be incarcerated than whites.8 In twelve states, more than half the prison population is Black, while in seven states there is a Black to white disparity of nine to one.9 As the ones who make the charging decisions, prosecutors play a key role in this racist outcome.

In its Report to the United Nations on Racial Disparities in the U.S. Criminal Justice System, the Sentencing Project noted that research showed state prosecutors were more likely to charge Black Americans rather than similarly situated white Americans under habitual offender laws.10 The federal system is just as insidious. According to the Sentencing Project report, research revealed that federal prosecutors were twice as likely to charge Black Americans with offenses carrying a mandatory minimum sentence as compared to similarly situated white Americans.11 As prosecutors have the power to choose who to prosecute, with what charges, and how severe a punishment to pursue, they are directly responsible for these racial disparities.

What Is Prosecutorial Misconduct?

According to legal ethics rules, prosecutors should act as “ministers of justice,” not just advocates, and follow their ethical obligations to ensure that people accused of crimes are prosecuted “fairly” and that innocent people are not convicted.12 Prosecutors’ tremendous power is bound by rules—and courts and ethical standards often claim to hold prosecutors to the highest standards of all attorneys.13 As the United States Supreme Court and the New York Court of Appeals have stated, a prosecutor “may strike hard blows, [but] he is not at liberty to strike foul ones. It is as much his duty to refrain from improper methods calculated to produce a wrongful conviction as it is to use every legitimate means to bring about a just one.”14

Despite these ethical obligations, misconduct persists, with devastating impact. According to Professor Paul Butler, a former prosecutor, “most prosecutors don’t see advancing the defendant’s interests as part of their job” and striving for harsh sentences is part of an office culture of winning.15

When prosecutors do not abide by those rules, that is called Prosecutorial Misconduct. Some of the more common forms of misconduct can be seen below. 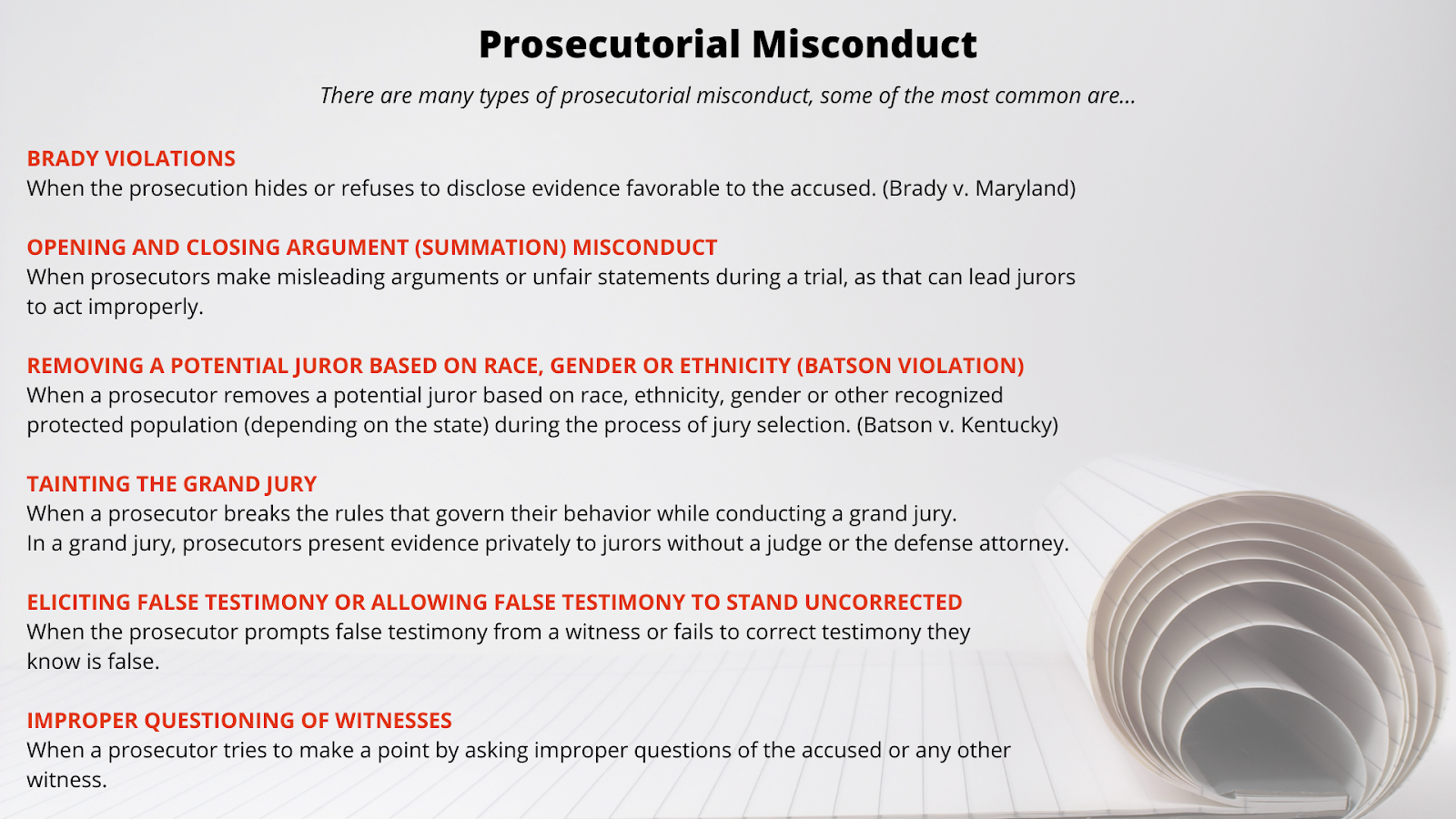 While other attorneys and law enforcement officers are liable to civil lawsuits when they break the rules, the absolute immunity doctrine often shields prosecutors from civil accountability.16 It is very difficult to successfully sue a prosecutor for misconduct.

The majority of prosecutorial misconduct is likely never discovered. Even on those rare occasions when courts find misconduct, they often deem the misconduct “harmless error,” leaving the conviction intact. Court decisions usually do not name the prosecutor, further reducing transparency.

This means that prosecutors who commit misconduct frequently continue practicing law without any public discipline. In fact, some prosecutors are promoted despite their misconduct and rise through the ranks of district attorney’s offices, where they have the power to train and supervise newer prosecutors, continuing a cycle of harm in the community.

The National Registry of Exonerations issued this 2020 report, examining the consequences of prosecutorial misconduct in particular exoneration cases. The report found that “[p]rosecutors who committed misconduct in criminal cases that led to exonerations were rarely disciplined; it happened only 4% of the time.” A 2013 report from the Center for Prosecutor Integrity identified 3,625 cases of prosecutorial misconduct between 1963 and 2013. Of those, only sixty-three prosecutors—less than two percent—were ever publicly disciplined.20

In their 2016 article, “Prosecutorial Accountability 2.0,” ethics experts Professors Ellen Yaroshefsky and Bruce Green pointed out that prosecutors “were rarely disciplined for misconduct, and if so, not very seriously.”21 Indeed, “neither judges nor defense lawyers ordinarily alerted disciplinary agencies when prosecutors acted wrongly … [D]isciplinary agencies and the courts overseeing them largely gave prosecutors a pass, perhaps hoping that prosecutors’ offices would clean up their own messes.”22 “It’s an insidious system,” said Marvin Schechter, then-chairman of the criminal justice section of the New York State Bar Association, to ProPublica.23 “Prosecutors engage in misconduct because they know they can get away with it.”24

In 2018, the New York Times Editorial Board wrote, “there’s no reliable system for holding prosecutors accountable for their misconduct, and they certainly can’t be entrusted with policing themselves.”31

Sadly, after three years of roadblocks to even basic reforms, the New York Times Editorial Board wrote another scathing op-ed, “How Can You Destroy a Person’s Life and Only Get a Slap on the Wrist?” excoriating the protective “layers of silence and secrecy that are written into local, state and federal policy, shielding them from any real accountability for wrongdoing.”

You can read the filed complaints on the Grievances page. If you want to learn more about this important issue, take a look at the News & Resources Page.

Visitor Note: The views expressed in cited sources represent only the source’s author(s) and are not necessarily shared by any Accountability NY coalition partners.