Posted on July 22, 2022 in A to F, Manhattan by AccountabilityNY 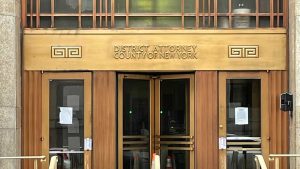 Who:  Law professors filed a grievance regarding Margaret Finerty’s serious misconduct while prosecuting Danny Colon and Anthony Ortiz on behalf of the District Attorney’s Office of New York County (DANYC). Despite this misconduct, as of the time of the complaint, Finerty had no record of any public discipline in the New York Attorney Detail Report. In fact, following this misconduct, Finerty became a New York City judge. Later, she entered private practice and according to her firm profile, has taught legal ethics courses for attorneys.

What they did: In People v. Colon and Ortiz, the Court of Appeals overturned the two murder convictions on account of Finerty’s serious misconduct. The Court found that Finerty elicited false testimony from a key witness, who downplayed the benefits the prosecution had provided him in exchange for his testimony, by testifying that he only received a benefit in one criminal case. According to the court decision, Finerty was well aware of additional benefits to the witness, including the witness’s other criminal case where Finerty personally appeared in court to offer a plea deal and later contacted the prosecutor regarding the witness’s cooperation. Finerty had also contacted the Housing Authority on behalf of the witness’s grandparents and was aware that the witness was not arrested or charged when a gun was found in his hotel room.

Colon and Ortiz spent nearly seventeen years in prison before their cases were finally dismissed in 2011.

Why it’s wrong: The Court of Appeals made clear that prosecutors, in their role as public officers, must “deal fairly with the accused and be candid with the courts.” This duty requires prosecutors not only to disclose exculpatory or impeaching evidence but also to correct the knowingly false or mistaken material testimony of a prosecution witness.

Prosecutors wield immense power, the power to seek punishment on behalf of the state, and should be held to the highest ethical standards.  The grievance identifies the following then-applicable ethical rules that Finerty’s conduct likely violated:

What can be done about it: The grievance calls for the committee to investigate and issue public and severe discipline, including a lengthy suspension of Finerty’s law license or disbarment. It also calls for a broader investigation into other cases prosecuted by the same prosecutor, and to determine whether the DANYC’s supervising and managing attorneys complied with their duties under Rule 5.1 of Professional Conduct.